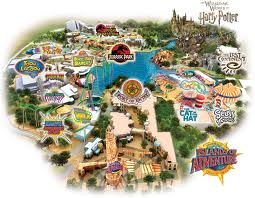 Universal’s Island of adventure is also referred to as Islands of adventure. It is located in Orlando, Florida, United States of America. It opened in 1999 due to the expansion of Universal Studios Florida that resulted in its conversion to become Universal Orlando Resort. Since the opening of this park to date, its slogan has been “Live the adventure”.

The general theme of the park is exploration where visitors to the park meet in a port and diverge to visit six other themed Islands. This illustrates a pure adventure as suggested by the theme of the park. The visitors of the park are therefore considered to be visiting the park in an adventurous mission. The latest Island to be opened in this park is The Wizarding world of Harry Porter. This Island draws its theme from the famous writer, Harry Porter.

This Island is considered as the largest investment ever made by Universals Island of adventure. Some of the characters used for the theme of Universals Island of Adventure are licensed from other studios in United States of America. However, there are other characters which are owned by the park such as: The Lost Continent, Jurassic Park and the Port of Entry. Some of the characters licensed from other studios, some of which don’t own a park are: Seus Landing, The Wizarding World of Harry Porter and Toon Lagoon.

The Port of entry is the park’s main entrance and has several shops. The island also offers various services such as guest relations. At the island also lies a centerpiece called Pharaoh’s lighthouse. The attractiveness and the beauty of the Pharaoh’s lighthouse is indisputable. Another Island which attracts many guests is the Marvel Super Hero Island. The rides found in this Island were inspired by the famous Marvel comic books. The primary components of this Island are the thrilling rides. However, there are characters featuring in the Island including Spiderman, Wolverine, and the Incredible Hulk among others.

The Toon Lagoon is also another Island found in the Universals Island of Adventure. It is meant for young and old people. The island is based on two characters: Jay Ward and King Features Syndicate. The name Toon Lagoon is based on the fact that the Island is made of water-based rides. The Jurassic Park Island was opened based on the Jurassic Park Movie. It has thrilling rides and exhibits based on discoveries and adventure. For more information please visit Universal Island of Adventure.