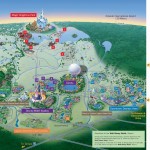 All across the world it is the dreams of many children to eventually go to Disney World. It is an amusement park of magical characters and entertaining rides. For children, it brings their favourite Disney characters to life and takes them on an adventure across all of the kingdoms, in and out of their favourite movies and the stories that they grew up with. With 6 parks in all, Disney World is the largest park/water park in the world, making this adventure, one that everyone will surely enjoy.

There are many theme parks in Florida’s Disney World. Starting with the Magic Kingdom Park, one can soak in the enchanting entertainment, classic attractions and spectacular parades and fireworks all while being surrounded by the Disney Characters that made Disney famous. After that one can try out Disney’ Hollywood Studios where you can experience shows, attractions and tours that offer behind-the-scenes glimpses of Hollywood-style action. Here Disney has such rides as the haunted Hollywood Tower Hotel, a death-defying elevator drop that will surely send your hear into your throat.

If rides are more your fancy, then the Epcot center is for you with their bevy of attractions and entertainment dedicated to technological innovation and the culture and cuisine of 11 nations, it is a refreshing twist on the world we see. Or you can step back in technology and visit Disney’s Animal Kingdom Theme Park, the world’s largest, full of attractions, adventure and fantastic animals. But Disney World doesn’t only have just theme parks, they are also famous for their, not one buy, two water parks.

Disney’s Blizzard Beach features one of the world’s tallest and fastest waterslides, a straight bullet to the ground, as well as slides and rides for the whole family. Ironically set in the freezing north, this water park has something everyone will enjoy. Disney’s Typhoon Lagoon on the other hand also sports attractions for the whole family-including fast waterslides, a children’s area with pint-sized raft rides, and a surf pool- but it also includes interesting interactive rides such as snorkelling in Shark Reef, with real sharks!

At Disney World in Orlando, Florida there are so many parks and attractions that you cannot go wrong. If you want your children to have a fun time, and you have fun with them, Disney World is perfect for you. It didn’t build its reputation letting people down, if you want to enjoy Disney World like millions of other families across the world, book your tickets today!